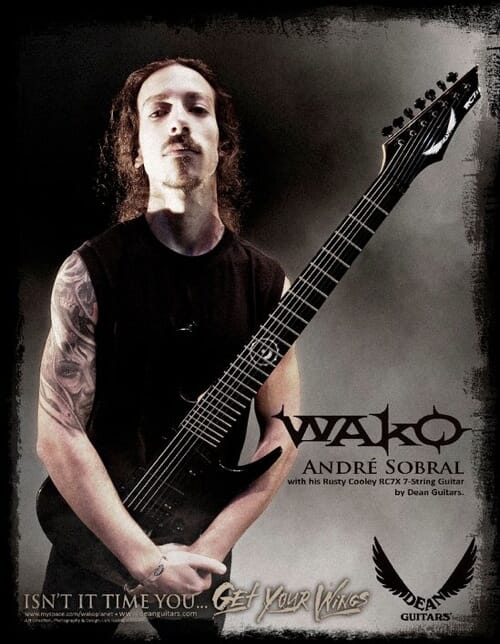 "We Are Killing Ourselves presents their new album "The Road Of Awareness" on July 31 this year was released on the label of Rastilho Records. Their debut album was already deconstructive Essence of four years back. At first hearing, I will assume that this was an American band, but when I read the bio of WAKO read my mouth dropped open in surprise. A Portuguese band that grabs you by your balls and not have any immediate plans to let go. With the opening number song The Shape of Perfection will put the tone, the song stomps out of your speakers. Loci tightly but what strikes me particularly is that it's pure sound. Fat guitar riffs, great drums capped with brutal vocals. My favorites are the songs Dissonant Dark Dance and slot number Coronation of Existence. This last number to the lords of WAKO told them the good stuff is. Lovely building with one of the best guitar riffs I have ever heard. I detected even a little Devin Townsend at the end. What does a man want more "
Wings Of Death - The Road Of Awareness

"This is yet another gem cast from the mines of Portugal. Great style and delivery done like some of the current masters of metal. Some may call it Nu-Metal, to this writer it is just good metal. This release will surely cause some spine lurching banging when in the player. Get you neck brace on, put this release on your favorite player and be prepared to experience the loud and unapologetic music of We Are Killing Ourselves. "
Alternative Matter - The Road Of Awareness

"Carousing Portuguese Metallers wreak havoc. One of the few decent extreme metal acts to emerge from Portugal, WAKO is another band to have bided their time before unleashing their particular brand of carnage. Their debut is a rich and nicely matured blend of furious metallic riffage." KKK
Kerrang Magazine

"Portugal may not be renowned for being a hot bed of metallic talent but it may just have an ace up its sleeve with the fantastically named W.A.K.O. (We Are Killing Ourselves) who have served up an appetizing slice of Lamb of God-styled clinical metal. It doesn't reinvent the wheel but what it does do is get your head banging with a healthy blend of foot to the floor trash savagery coupled with a knack of finding melodies that will stay in your head for weeks. Great stuff." 7,5/10
TERRORIZER Magazine

"The Road Of Awareness" is immense and a definite late contender for album of the year, and certainly it should be on all to buy lists. WAKO have returned and the rest of metal had better watch out, the challenge has been set and its bar raised."
Pete RingMaster - thisisnotascene 9/10

"The Road Of Awareness is the sophomore release from Portuguese death metal band, We Are Killing Ourselves. I'm not familiar with the band's earlier work so I was not quite sure what to expect going into this release. What I found was an incredibly heavy, extremely technical and at times melodic death metal record that dishes out a serious auditory pounding."
Bruce Moore - puregrainaudio.com

"We Are Killing Ourselves are back and hitting the charts fast and fierce, leaving their bloody knuckle prints steadily climbing to #1. 'The Road of Awareness' shreds up and down the metal genre incorporating heart pounding metallic riffs with deep cutting vocals giving a relentless head-banging sensation. This album is packed with jaw dropping drum fills and beats as well, displaying amazing talent. With a immensely heavy feel 'The Road of Awareness' stays consistently hard hitting throughout the entire album with amazing stamina."
Devin Clarke - http://migratemusicnews.com

" Four years after the release of their debut full-length effort Deconstructive Essence, Portugal-based outfit We Are Killing Ourselves (aka W.A.K.O.) are back with their sophomore effort The Road of Awareness. And it doesn't fail to deliver one bit. ... ... Opting for a somewhat slower-paced opener, "The Shape of Perfection" proves itself to be a huge sounding track that showcases the band's ability to produce huge grooves in the vein of Lamb of God, but with a progressive edge in the guitar riffing that brings to mind a cross between Meshuggah and Gojira. It's an interesting mix of sounds and influences, but one that works in giving off a menacing and aggressive feel throughout, all the while retaining a strong sense of groove that's both catchy and infectious."
Justin Donnelly - Blistering.com 8,5/10