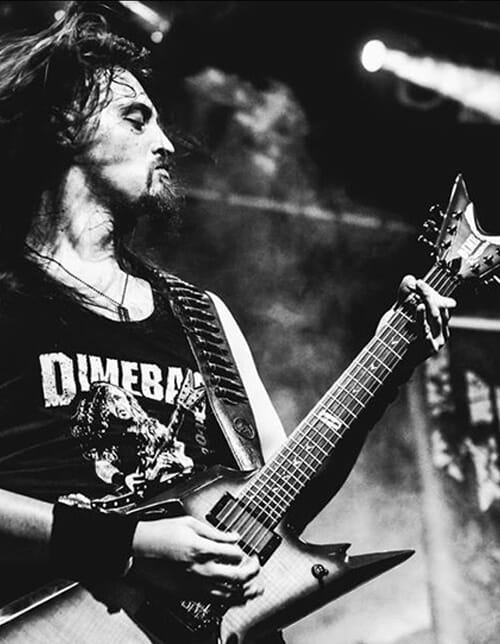 Lukasz has been playing guitar since 2002. At 19 years old he was able to hone his skills with guitar lessons from Vader guitarist - Maurycy Mauser Stefanowicz.

From a small town, Łomża, on the east side of Poland, he cut his teeth playing with Memembris and Internal thorn. Now he can be found studying sound enginnering and playing with War-saw, who have supported bands like Destruction, Rotting Christ, Down, and Accept.

The band called War-Saw was established in February 2008 in Warsaw, Poland.Since the inception of the band, it was clear that the musicians were interested in playing fast, technical and selectively thrash metal. Within a few years the band toured all over, recorded two well-received EPs, but also underwent some personnel reshuffling. At the beginning of 2013 War-Saw made their debut album, titled Nuclear Nightmare. The album was recorded in Progression Studio under the tutelage of Paul Grabowski, mastering done at Hertz Studio, and the cover was designed by Michael Xaay Loranc. The video for the track "Nuclear Nightmare" is available on YouTube.

In June 2013, the band won the Internet eliminations and performed at the prestigious festival Metalfest in Jaworzno. After this performance, and subsequent changes in the line-up, the band toured a lot performing at 30th Anniversary Destruction in Oberhausen and at festivals in Warsaw. Currently, they are focusing on creating new material for the next album, which will be released in 2015.