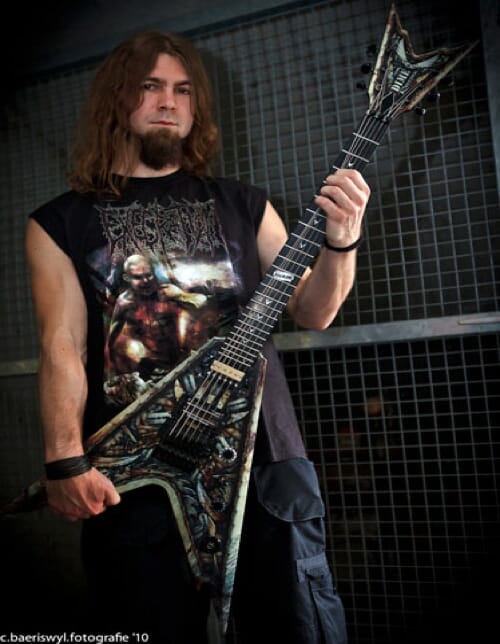 Amagortis was formed in 2001 by Dan, Stoef and friends. Together they created the unique band name. In August of 2002 the band recorded a three song demo containing three groovy tracks of death metal brutality. After several member changes the band members consist of Dan (Guitar and back vocals), Paescu (Vocals), Stoef (Drums) and Nathalie (Bass). Influenced by the world-wide death metal scene the band gaining more and more experience and the music became more brutal and faster than before.

In January of 2004 Amagortis released their first full length album "Abominable" including 10 tracks of pure devastation! The debut album was live-recorded at Amagortis old studio, mixed and mastered by Sigu, and self-released all over the world by the band itself. Multiple songs of this album have appeared on various underground compilations. Since 2004 Amagortis performed several times in small gigs and metal-festivals in Switzerland.

In 2006 Pascal replaced Grimm on vocals, bringing a more guttural and brutal style to the band. Influenced by the world-wide death metal scene the band gained more and more live-experience and the music became more brutal and faster than before.

In December of 2007 Amagortis released their second full length album "Pre-Natal Cannibalism " via Fastbeast Entertainment (CH) including 11 tracks of slamming guttural brutality. Since then the band has toured in the USA and the UK and has played a number of gigs and festivals in Germany, Holland, Russia and of course Switzerland.

After the departure of Stoef and Nathalie, the line-up today consists of Daniel (Guitar and backing vocals), Pascal (Vocals), Ruppi (Drums) and Marc (Bass).In 2010 the band has signed a multiple album deal with the US-label Brutal Bands, placing them next to international heavyweights such as Devourment, Insidious Decrepancy, Abysmal Torment and Human Mincer.The band has just finished recording their third full length album entitled "Intrinsic Indecency", which will be released in June 2010 through Brutal Bands.Furthermore Amagortis will return to the USA in July 2010 for a tour as well as some sick festival appearances (Las Vegas Deathfest, CIM) and will return to Russia for a tour in September.