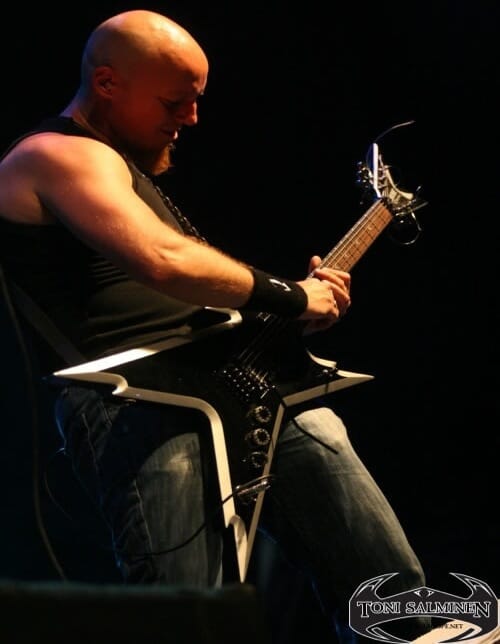 Mikko Salovaara is a rare talent with an immense background of musical studies and involvement in styles ranging from classical to jazz, yet his heart has always been in metal music. His playing bears the trademarks of all the greats of modern rock/metal guitar such as Vai, Gilbert, Petrucci, Romeo, Friedman and Dimebag, yet he can surprise you any time with a quotation of Stevie Ray Vaughan or Mike Stern. This dedicated musician never seazes to practice and develop his craft, and as time goes by, you can hear more and more of his own personality in his axework.

Mikko was born in 1979, and started playing at the age of twelve, and quickly after learning the basics, he started studying classical guitar seriously at the Espoo music school, where he spent 7 years, studying also music history and theory. He completed a professional level degree and earned several scholarships for his degrees and concert performances. However, throughout this time, he dedicated a lot of his time to the electric guitar, and in his teens drew inspiration from Guns'n'roses, Pantera and Metallica, as well as Bach and Paganini. A bit later in his youth he also began studying at the Pop and Jazz conservatory of Helsinki. He also spent three years studying musicology at the Helsinki University. Currently he is finishing a degree in Pop/Jazz-music education at the Helsinki polytechnic institute Stadia.

Although Mikko has dedicated a lot of time and effort to gain knowledge and mastery of several styles of music, he has never lost his relationship with hard rock and metal. This passion would finally manifest itself in the music of Kiuas - an innovative and unique metal band combining modern metal with whatever happens to inspire the composer. Although accessible for any metalhead, the enlightened listener can hear sounds from flamenco to blues, from classical to folk music. Mikko is solely responsible for the music and vision that is Kiuas.

After releasing the first Kiuas record, Mikko was nominated for "player of the year" at the Finnish metal awards, where the nominees are chosen by Finland's top journalists. Besides releasing two records and a mini-CD with Kiuas, Mikko has also recorded a "Bandoke" (concept similar to Karaoke but for all instruments) record of 19 Pantera songs, playing all guitars and bass - note for note. He's also a member of " Dimebag beyond forever", an all-star tribute band of Finnish musicians that has toured two winters around Finland in Dimebag's memory, even receiving the acknowledgement and blessing of Mr.Vinnie Paul. Somewhat of a hometown hero on a larger scale, Mikko also has acquired numerous young followers and teaches steadily at a private music school in Espoo.

His hair may be shorter than Herman Li's, but his curly chops are sure to grab you by the balls. Consider yourself warned - here is a future name to look out for!