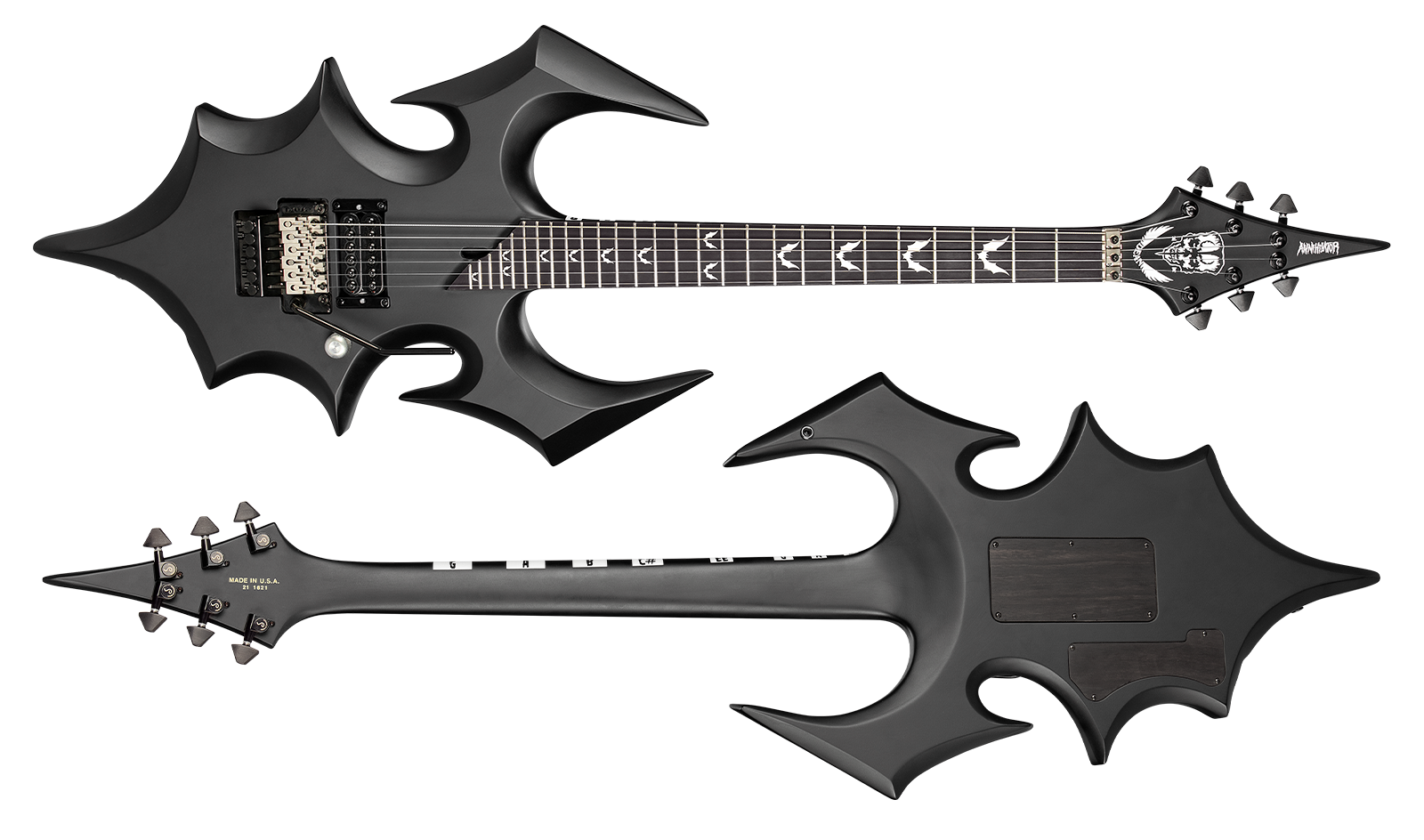 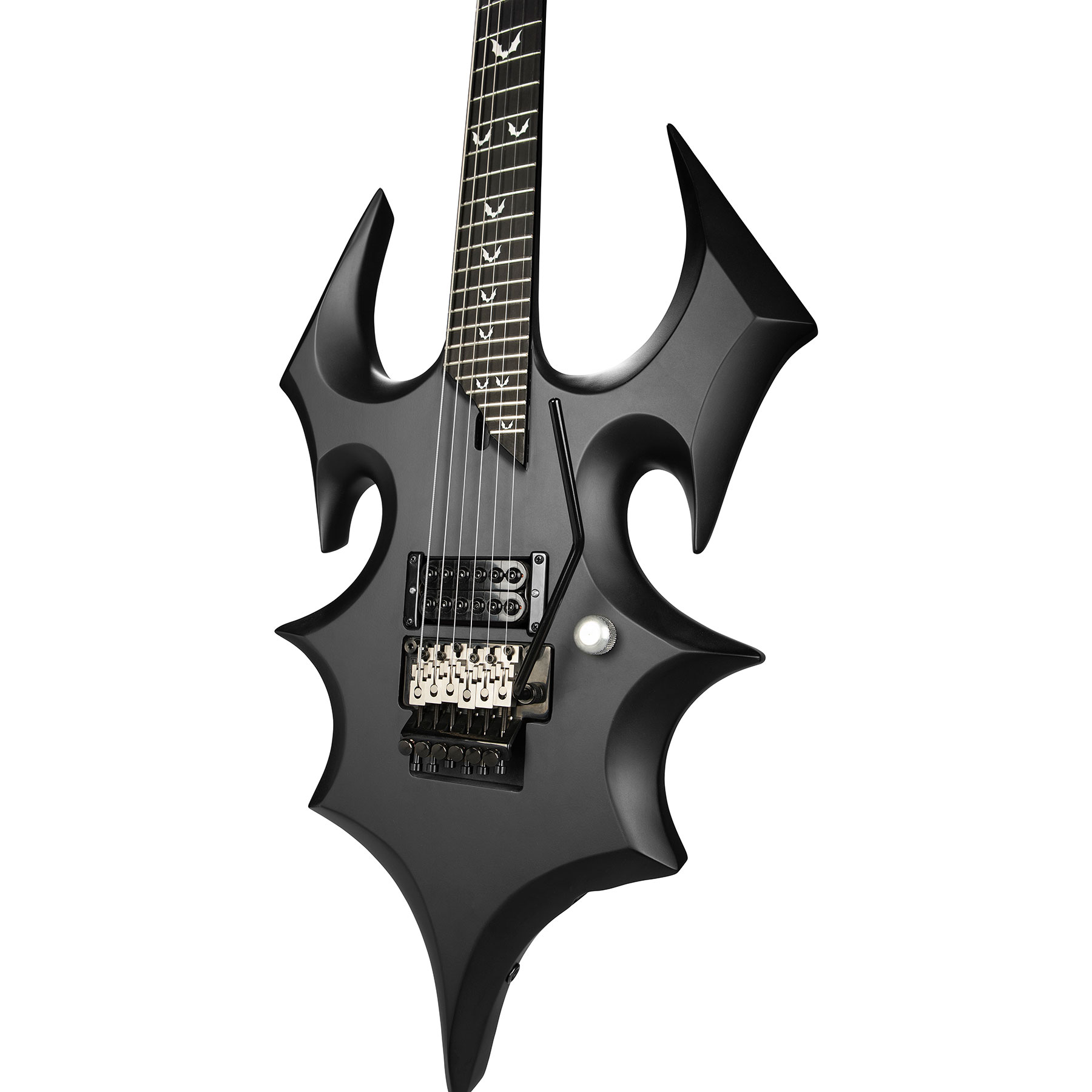 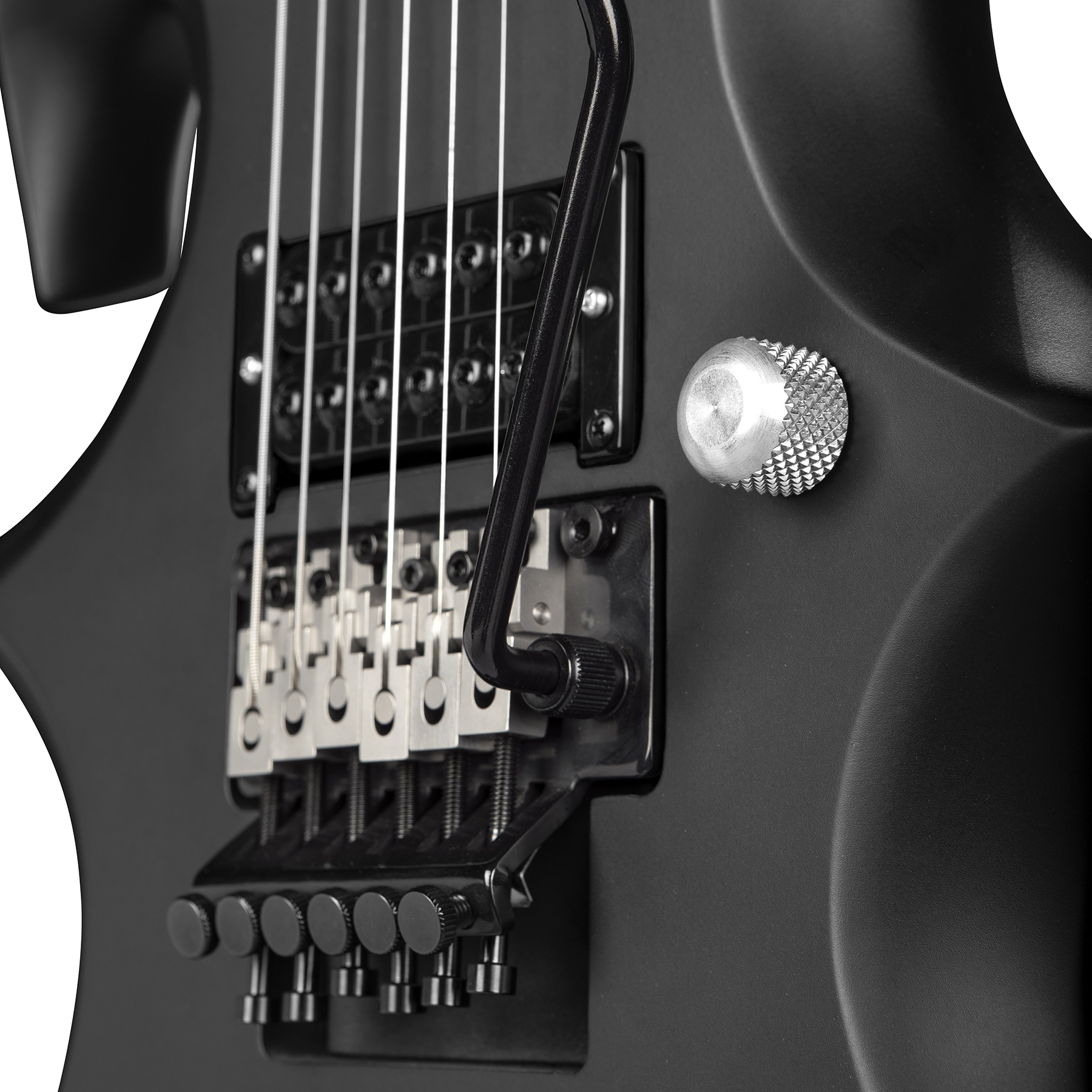 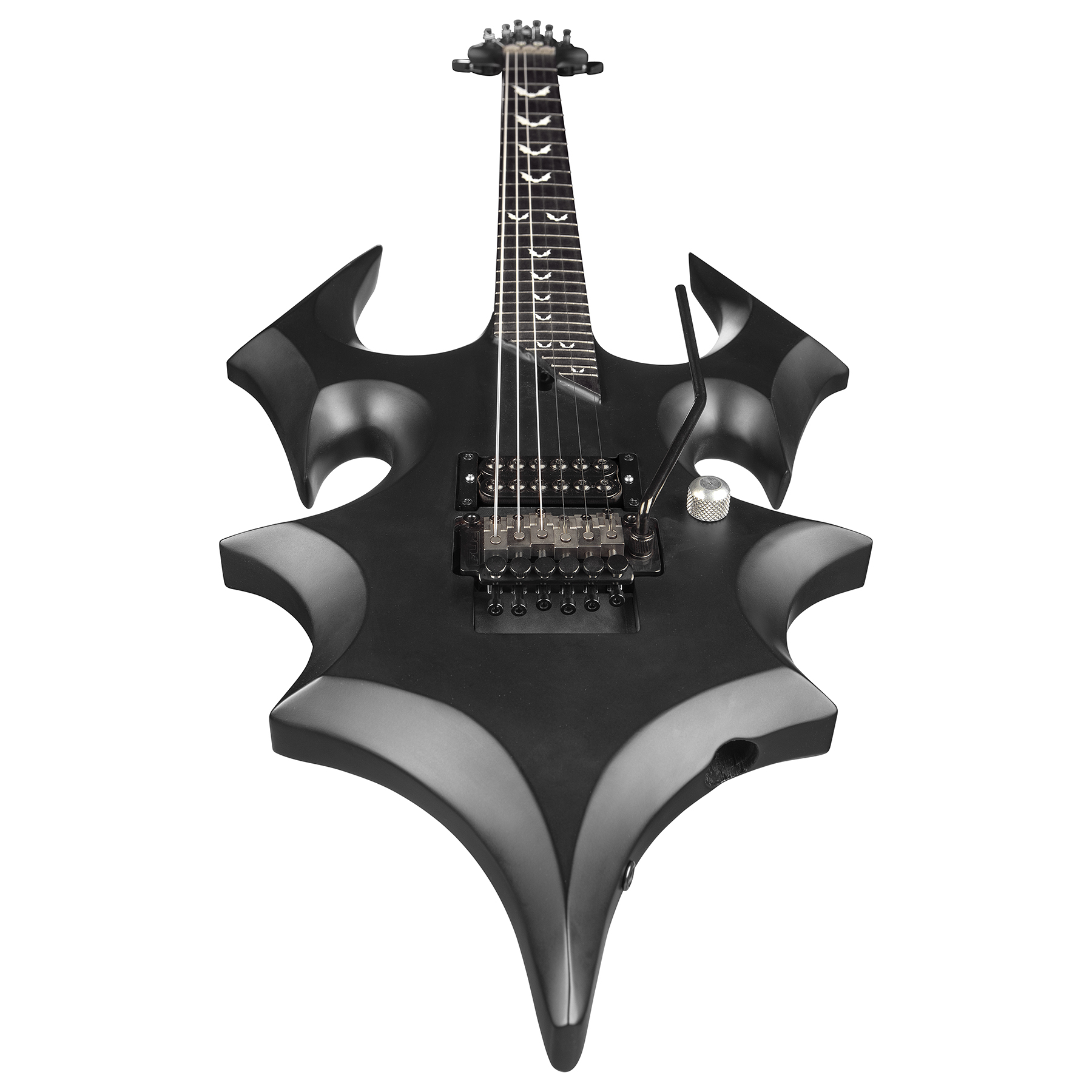 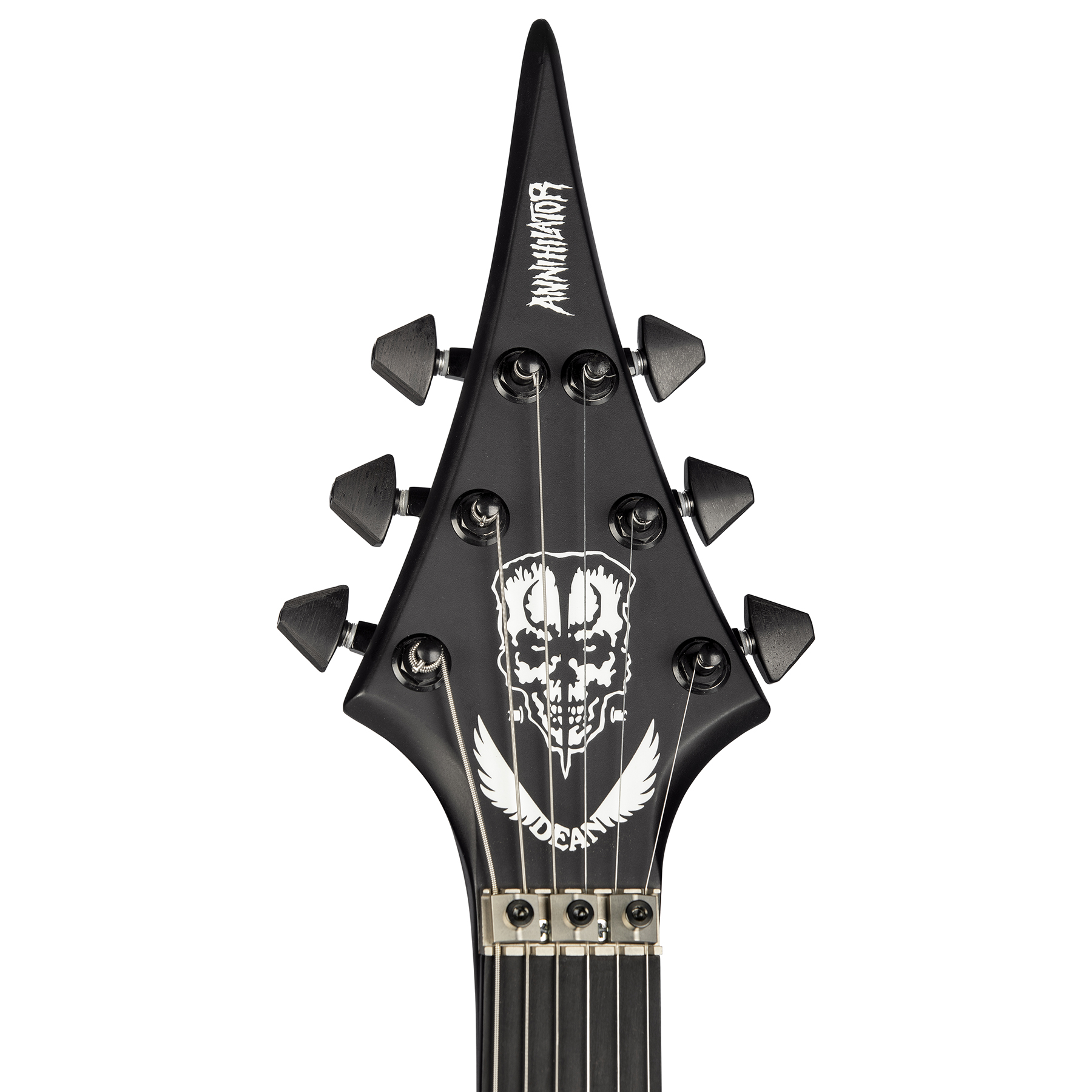 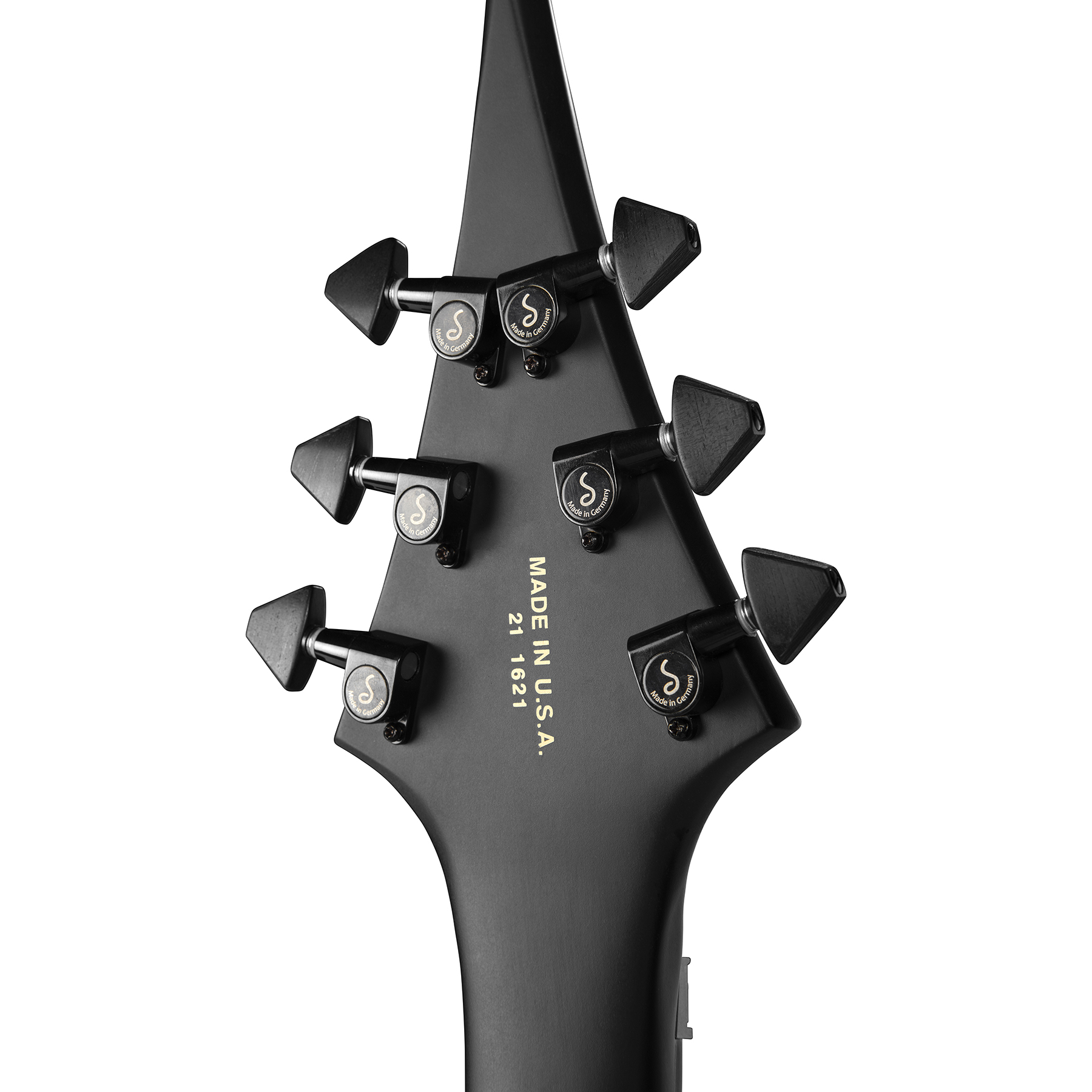 Legendary Misfits guitarist as well as solo artist, Doyle Wolfgang Von Frankenstein, has teamed up with Dean Guitars to take his Annihilator Signature Guitar to the next level!
Every inch of this guitar has been worked on meticulously: from the angle of the bevels, to the countersunk pickup braces, down to Doyle’s personal speck neck profile which has smooth shoulders with a super thin flat back. The large side markers are a graphic embedded into the finish of the neck, topped with a Richlite fingerboard that shows off the custom Doyle Inlays. Doyle’s own handmade high output custom pickup is used in every one of these guitars to provide his “monster” tone. Each Annihilator comes with a full FU Tone titanium tremolo system with purple springs and a tremsetter for those who love the feel of the recessed system but like the option to choose whether it is floating or if it just dives.
Other features are its 27 jumbo nickel frets, Schaller M6 mini tuners, dome 2011 T3 aluminum volume knob and the insanely beveled Annihilator body shape that has become synonymous with the man himself.
This guitar is so incredibly detailed it could only be made by Dean Guitars. 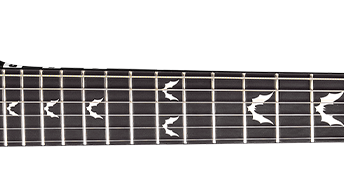 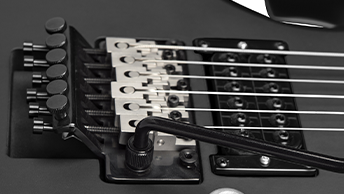 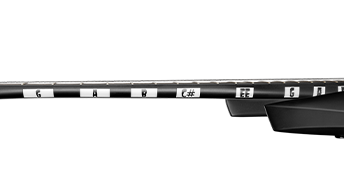 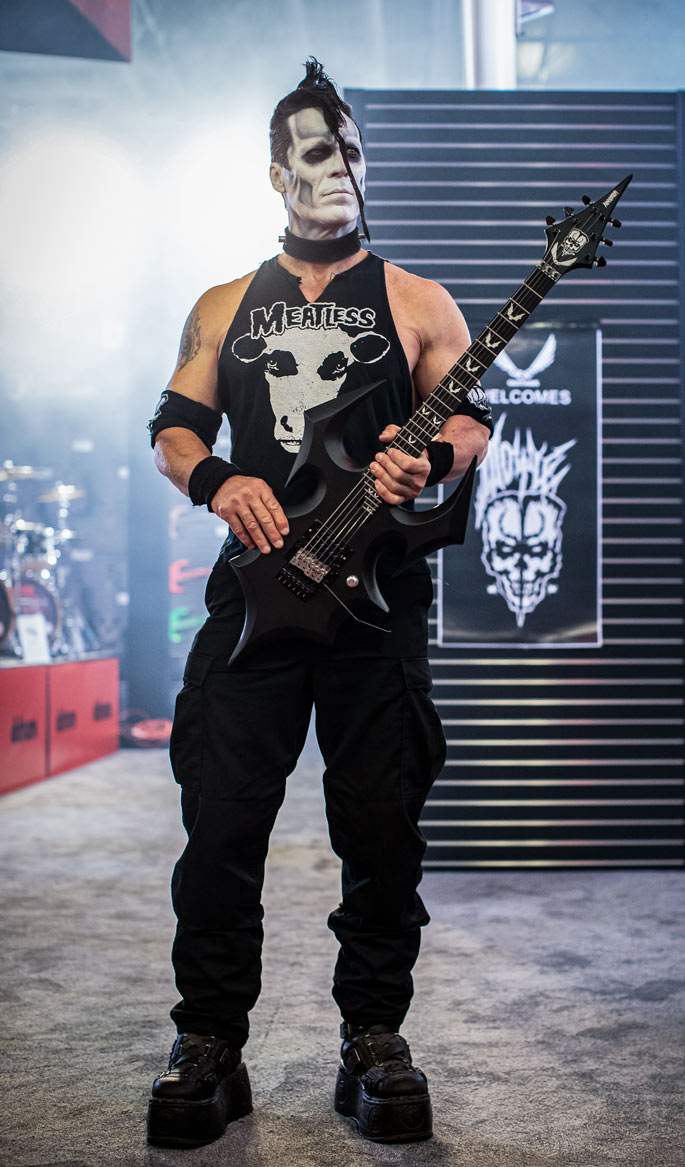 Lodi, a small borough of Bergen County, New Jersey, is just over two square miles. There’s not much to suggest that the small village would be the birthplace of a world-famous, blood-soaked form of music known as horror punk. Legendary acts  Samhain, and Danzig all have their origins in Lodi, and something monstrous indeed lurks there. The poster child and originator of the genre, himself, has once again unleashed an evil noise on an unsuspecting world: Doyle Wolfgang Von Frankenstein’s first release, Abominator, by his eponymous band, Doyle.

Released on Doyle’s own label, Monsterman Records, Abominator is a sonically thick and lyrically evil slab of metal that finds Doyle expanding in a logical progression upon the genre of music he helped create. Abominator is not the sound of some punk guitarist gone metal- it’s the roaring return of one of extreme metal’s original architects to his blood-splattered drawing board.

Coming from a legendary band of almost mythological proportions, and having first worked with one of the most talented and respected vocalists of the century (the infamous Glenn Danzig), Doyle’s new project would need a singer with brass balls, cast-iron pipes, a suitably twisted mind, and his own vocal delivery style. Enter Alabama’s Alex Story of Cancerslug, a Southern fiend whose sand-blasted scream opens the record, and the evil doesn’t relent until the ending growl of “Hope Hell Is Warm”, the album’s defiant closer. The man can scream and sing, and employs both styles to great effect, switching seamlessly from raw-throated roars to rough-edged, yet melodic, clean vocals. Alex’s live performances can only be described as unforgettable, disturbing, and strangely addictive – a perfect complement to the already mammoth stage presence of Doyle himself.

The unmistakable sound of Doyle’s signature Annihilator guitar cuts through on every tune like a sonic fingerprint, starting with the snarling opening title track “Abominator”. The Annihilator’s tone is sharp as a butcher’s knife in the wrong hands and just as nasty- fans of the Misfits will recognize it right away.

On tunes like “Headhunter” and “Land of the Dead” the riffs are relentless, and if a riff could be described in emotional terms, remorseless. “Dreamingdeadgirls” brings a blackened-blues swing, and the doom-laden “Love Like Murder” shows a healthy appreciation for all things Sabbath. “Blood Stains” moves from primal sludge to ripping off-time thrash with ease. The album is just that- an album, a cohesive and well-executed piece of work that takes the listener on a journey; albeit a bloody journey to places, some fear to tread.

As befits songs as musically dark as Abominator‘s, the album’s lyrics are not for the faint of heart. Throughout the entire record, there is absolutely zero attempts to balance its evil with any sort of good counterpoint- penned entirely by Story (probably in blood), Abominator‘s lyrics are entirely and uncompromisingly dark. Music fans looking for feel-good anthems had best look elsewhere- those who enjoy strolling through the shadows will be greatly satisfied. 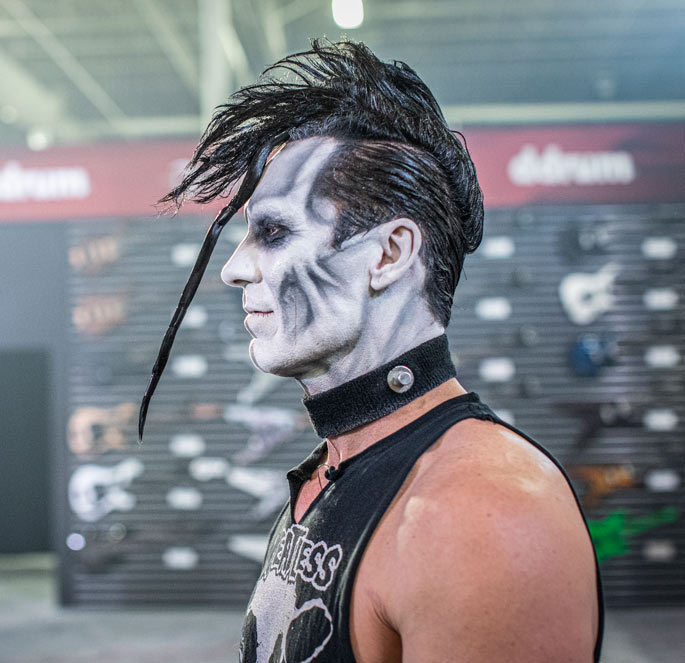 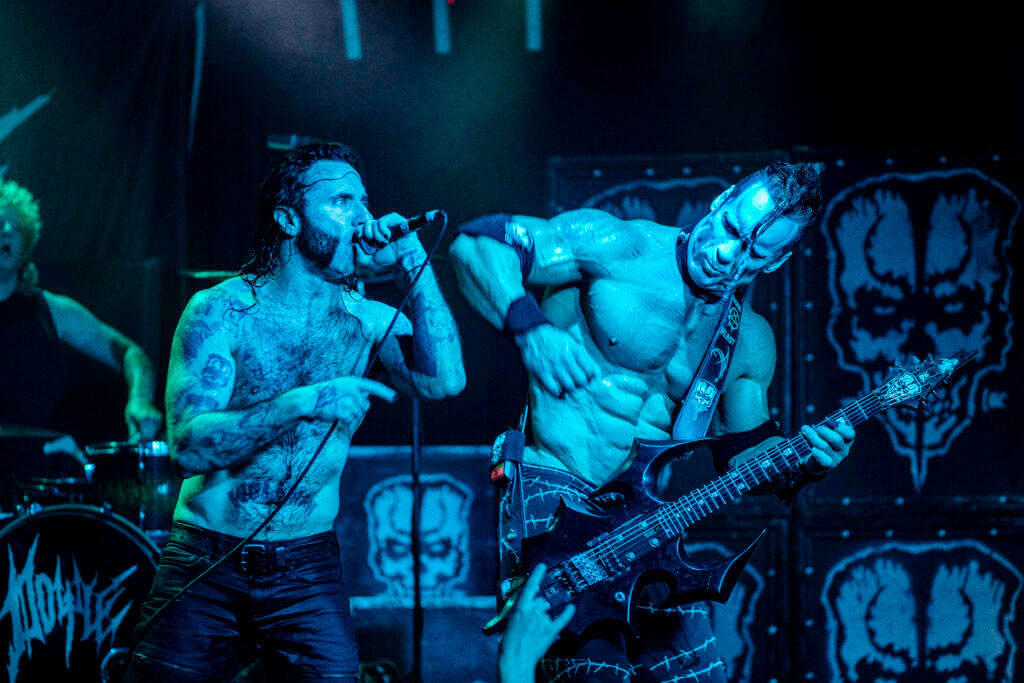 So how did this Jersey devil and crew wind up with a Dixie-bred howler? “

After I had written all this music, I realized I had to get someone to sing this stuff- once I’m done recording guitars, all I can see is myself just playing that riff, ya know? That’s my thing, not lyrics and singing,” Doyle says, with typically blunt candor. “I’ve known Alex for a while, so I called him up, then sent him a bunch of the tunes. Two days later he sent me back ‘Mark of the Beast’, just like it is on the record. I said ‘That’s exactly what I want!’, and the rest is history. I only wrote the word ‘abominator’- all the rest of that stuff is Alex. He’s just crazy, man”. It’s a match made in hell. But, no metal band would be complete without a complete animal behind the drum kit. Brandon “The Crusher” Pertzborn (of Black Flag) delivers all the aggression and insanity necessary (and then some) with his exquisite musicality and showmanship.

So what can fans expect at a Doyle show?

“To get @#$%$&^ pummeled, man. And then go home and ask themselves ‘What the %#@! just happened to me?!?’, hahaha…” he replies with a laugh that this time, no joke about it, actually sounds evil. Loud, aggressive, and technically proficient, Doyle and crew are set to show the world how true horror metal sounds today.

So crank up Abominator until your speakers blow, check out Doyle on tour, and let the beatings begin!

written by: Randy Blythe of “Lamb of God”